The Most Important Part--Belle Joli Winery

Art.  Craft.  Career.  Way of life.  Winemaking is many things to many people.  To the people who love and drink wine, sometimes winemaking seems like this supernatural voodoo where grapes are turned into a magical potion that tingles our taste buds and lifts our spirits.  However, the people that make wine know what is really behind the magic of wine.  Over the summer, I have learned some of what it takes to make wine:  passion, curiosity, patience.  But all of these are not enough.  The most important element is still missing.  That element is good, old-fashioned, hard work!


At the beginning of October, I had the honor of helping with my very first harvest for Belle Joli Winery of Belle Fourche, South Dakota.  Husband-wife team Matthew and Choi Jackson, Belle Joli vintner and CFO, are a wonderful wine story.  Matthew was raised in and graduated from high school in Belle Fourche.  His wine-loving dad and brother are both dentists.  When Matthew graduated with an undergrad degree in chemistry, his family fully expected him to go on to dental school and join the family business.  But Matthew had been listening to his parents throughout his childhood.  He heard his dad, John, and his mom, Patty, always reminisce about their early married years when they joked they considered making wine in California in the 1970s, before California was the wine Mecca it is now.  He listened to their love and appreciation of wine. And he took it to heart.  Instead of dental school, Matthew announced he was going to enology school at California State Fresno.  There he met Choi and eventually convinced her to come back to South Dakota with him to make wine.  The rest is wine history. 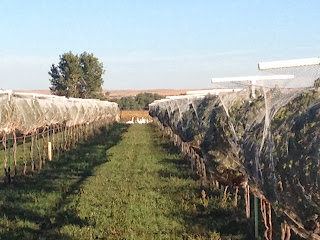 The grapes I was helping to pick were from the vines outside of Belle Fourche planted in 2004.  When I showed up at 8:00 a.m. to begin picking, Matthew and a crew of two had already been at work for some time removing the bird netting from the LaCrescent and Frontenac Gris vines.  They were first using a tractor to help with the hundreds and hundreds of feet of netting, but when there was a glitch, they removed the rest by hand.  Belle Joli is truly a family business; the crew helping pick was made up of Matthew’s mom, dad, sister-in-law, family friends (some have been helping pick for ten years), neighbors, and even a local university dance team! Matthew and Choi’s nieces and nephews were also running through the vineyard, exchanging our filled tubs of grapes with empty tubs.  After homemade caramel rolls for breakfast, served by Choi and Patty, we picked for eight hours, with a break for sandwiches and homemade brownies for lunch. 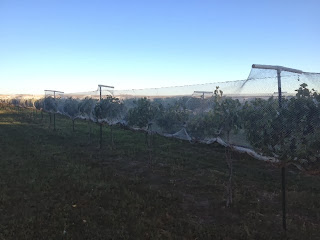 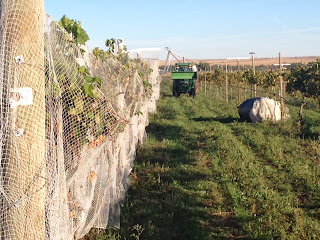 Hardworking winemaker Matthew removing the nets so harvest can begin. 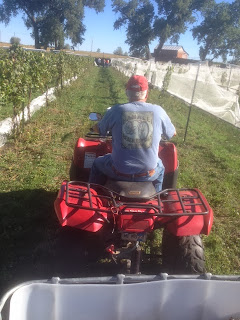 The weather was beautifully warm for a fall day, and I thoroughly enjoyed my day picking.  However, when I was done picking, I was done for the day.  Winemaker Matthew’s work for the day was just beginning. He delivered the grapes to the winery and began the process of destemming and crushing the harvest.  Choi said he would work well into the night and have a crazy week or so processing and fermenting the grapes.  The second harvest was planned for two weeks later, and I was in line to harvest the still-growing Marquette grapes.  But in typical destructive Mother Nature fashion, a huge October snow storm unleashed itself on the Black Hills.  The day before harvest, over 40 inches of snow fell in Belle Fourche, moving harvest back…one whole day.  Those in the industry realize that even though I was snowed in at my home, safe and warm away from the incredible blizzard, hard-working winemakers like Matthew have no such luxury.  As soon as the roads opened, those Marquette grapes had to come off the vines. I am sure this harvest wasn’t nearly as beautiful or fun as when I picked two weeks before, but it was a must for Matthew and family.  Luckily, the grapes were not damaged from the storm and harvest was completed without any more disasters.  Matthew and Choi continued the hard work that is their passion, curiosity, career, craft, and love. 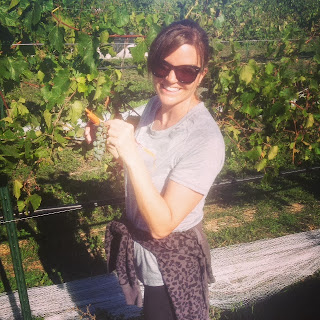 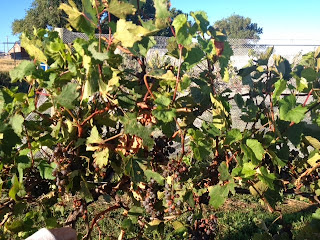 Though wine seems like such a romantic beverage (and believe me, it truly is), there is nothing but hard work behind that beverage.  Wine drinkers need to let go of the idea that winemakers sip wine in beautiful vineyards at sunset and in front of glistening fireplaces in the dark.  The true vision of a winemaker is of someone who gets up well before dawn and works well after midnight.  Winemakers are apt to have purple-stained fingers, calloused hands, and tired backs.  They also have a hard-working family or crew behind them, both figuratively and literally, making the dream a reality.  I have seen the passion, curiosity, and patience winemakers possess, but ultimately, all of these aspects of the business are nothing unless hard work comes into play!  Thank you, winemakers, for all your work.  I toast to every one of you! 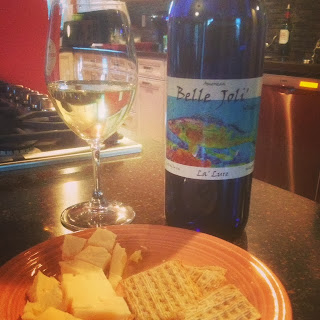 My after-harvest meal--thank you Matthew, Choi, John, Patty, and crew!

Posted by The Sweet Sommelier at 5:09 PM