The story began when Rob and Kim Livingston had an idea—they wanted to bring a winery tasting room to the Black Hills.  They searched for business partners and found an Oregon winery looking to expand.  In 2011, the initial Naked Winery Tasting Room was opened in Custer, and the Hill City location soon followed.  (Read one of my very early blogs about Naked Winery's opening here.)
Rob and Kim jumped into the world of wine head first.  They expanded their tasting room in Hill City while expanding their clientele.  They brought in additional wines and blended their own.
But this is not the end of the story.  Quite far from it.  It is actually the beginning of another story.
Not long after Naked Wines became a success in the Black Hills, Rob and Kim knew they wanted to diversify.  Rob had long been a beer lover, especially of beer heavy on hops that add the strong, biting flavor.  It was a match made in heaven between the wines already at the tasting room and the beer Rob wanted to produce, so he again expanded, and Sick and Twisted Brewing was born. 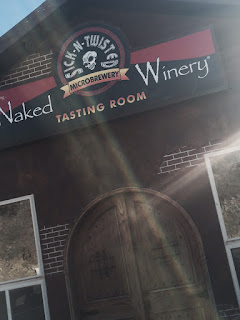 Sick and Twisted stays in the same vein as Naked’s wines—a little bit of naughty and a whole lot of fun.  If you blush easily, some of the names might make you uncomfortable, but if you take your beer more seriously than you do yourself, this is the place for you.
On any given day, Sick and Twisted has 18 beers on tap, but that doesn’t include numerous other batches that might be brewing in back.  Rob and Kim both love to cook, and this love is where many of the beer ideas originate.  Rob creates all the recipes, and always makes sure to have a variety of styles on the menu.  For instance, there is always an ale, a stout, and an IPA from which to choose. 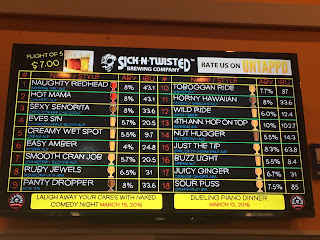 Though these are the “usual” suspects most expect to see, there are many very unusual options here as well.  Yes, a blonde ale is common.  But what about a watermelon blond ale?  An IPA is also common.  But what about a Black Hills spruce tip IPA?  Other unique features include Juicy Ginger and Sour Puss—both fun, citrusy options.  Then there is the Sexy Senorita, a chocolate, coffee, chili stout. 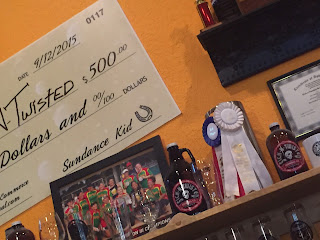 As Rob comments, he is “having a gas” making these beers.  The twinkle in his eye is visible when he talks about his creations.  One especially has him grinning.  At the Great American Beer Fest in 2012, he saw a peanut butter beer.  He came home determined to make his own.  He took his Nut Hugger, an already earthy and nutty beer, and added peanut butter.  Each time he makes it, he changes the jelly flavoring.  However, also each time he makes it, it is a huge success.  The last time Rob poured this at a tasting event with the public, the first keg tapped out in an hour and twelve minutes; the second was gone in an hour and fifteen minutes. 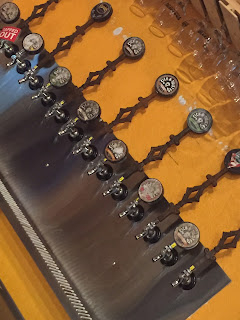 Sick and Twisted’s story continues with Rob’s newest project, the exclusive contract for producing Rushmore beers.  The names and labels will not only reflect the four presidents on Mount Rushmore, but they will also be unique brews.  The first is Honest Abe, a red ale for President Lincoln.  The Never Lie Porter represents George Washington, and Thomas Jefferson is on the label of Declaration of Independence IPA.  Perhaps the most unique Rushmore beer is the Big Stick Lemongrass for President Roosevelt, a lemongrass and mint beer inspired by a mint julep.
Sick and Twisted cans several beers and fills growlers too, so these unique Black Hills beers can be enjoyed no matter where home is.  Food options consist of pizzas, sandwiches, soft pretzels, and cheese plates.  Fun events, including comedians and costume parties, are a continued example of the fun vibe Kim and Rob try to encourage here. 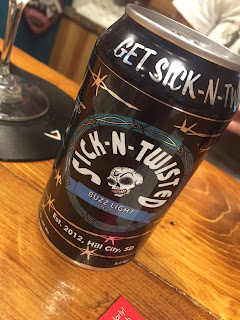 The story of Sick and Twisted all started with a love of wine.  However, the appreciation of beer soon followed to continue to thicken the plot for Rob and Kim Livingston.  They are having a ton of fun taking the “pecksniffery” out of both quality wine and craft beer.  They take customers on quite an entertaining trip, all via a pint of beer.  Luckily, their story is not finished yet. 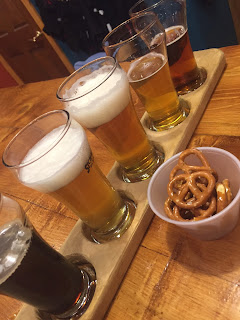 Easy Amber—This is the beer for beginners and Bud Light lovers.  Just 4% alcohol and only 1.5 IBU (international bitterness units), this is a light-bodied beer any drinker will love.

Naughty Red Head—The imperial red ale is a beer for all year.  The more serious beer aficionado will enjoy this one due to its slightly heavier alcohol and much heavier IBU (43.1) than the Easy Amber.

Peanut Butter and Jelly—So unique and so popular, this is a medium-bodied, nutty, earthy beer.  Mix this with the smoothness of peanut butter and the sweetness of jelly, and the PB&J is a hit.

4th Anniversary Hop on Top—“Hop heads” will unite behind this fourth generation IPA. This is Rob’s personal favorite; he loves the citrus and grapefruit with the hop finish.  At 102.7 IBU, this beer packs quite a punch.
Posted by The Sweet Sommelier at 7:45 PM