Wyoming and Wine—We’re a Frugal Bunch

Catherine Pulsifer once said:  “Being frugal does not mean being cheap!  It means being economical and avoiding waste.”  This saying applies whole-heartedly to the recently released Wyoming Liquor Division list of top wines sold in the state last year.


Focusing on wines sold in 2012, twenty-two of the top fifty-one were box or jug wines.  Franzia was number one with its Chillable Red, with over 5,000 cases sold!  Franzia had seven of the top fifty-one wines sold in Wyoming in 2012.  Peter Vella, another boxed wine, had four of the fifty-one.  Carlo Rossi jug wine and other box wine producers Black Box and Bota Box were also represented with two each.  The state Liquor Division lists Hornsby’s Crisp Apple Cider as the second best selling wine in the state…even though hard ciders aren’t wine at all, but would belong more in the beer family.  A second hard apple cider by Angry Orchard ranked twenty-ninth in sales.


Now, if you are reading this list of best selling, cheap, low-quality wines as proof that Wyoming has incredibly poor taste in vino (like I did at first, before I tucked away my inner wine snob), I decided to quit looking at the glass as half empty and look at the glass as half full…and maybe the bottle as half full, too!  My first silver lining to the wine sales stats was the placement of the Folie a Deux Manage a Trois Red as the number six wine.  This reasonably priced wine with its oh-so-racy name is a blend of Zinfandel, Merlot, and Cabernet Sauvignon grapes; it’s a dry, tannic red wine, and it impressed me that Wyoming drinkers are drinking this more “serious” wine.  The next pleasant surprise was Apothic Winemaker’s red blend.  This does not have a risqué name, but does have a super-cool red and black label and super-serious grapes:  Merlot and Syrah.  Apothic is a bold, tannic red and was the number nine seller in the state!  Yes, there was the dotting of many different producers of white Zinfandel on the inventory; however, Wild Vines Blackberry Merlot was number twenty-three.  (This was a huge victory in my eyes, as this is the “wine” that the largest number of non-wine drinkers request from me at fundraising and open house events.  I always direct them to a Moscato d’ Asti or another sweet wine.)  I was also heartened to see three Pinot Grigios, five Chardonnays, four Merlots, and two Cabernet Sauvignons in the top fifty-one wines sold.  Though these wines were all from less expensive producers like Woodbridge, Cupcake, Fish Eye, and Barefoot, it shows that Wyoming palettes may be beginning to like some dryer and more acidic wines, not just the box wines.  The fact that only two Moscatos and one Riesling made the list also shows that once Wyomingites get past the box and jug wine craze, they seem to be moving past these two, what I consider to be, gateway wines—wines consumed by novice wine drinkers that allow those wine drinkers to move on to other wines. (Riesling was my gateway varietal into the wine world more than a decade ago!)


All of this data taken together makes me have great hope in Wyoming’s wine drinkers.  Yes, they still buy more box and jug wine than anything else, but this seems to be more frugality than just poor taste in wine. When buying wines that rarely cost more than fifteen dollars, they are being economical and avoiding waste while drinking dryer reds and acidic whites made by the well-known producers of quality but less expensive wine…not necessarily just cheap!  I hope Wyoming winos (dare I spell wineaux) will continue to try the new producers of reasonably priced wines, all while being the sensible spenders they have proven to be!  Expand those palettes, Wyoming winos! 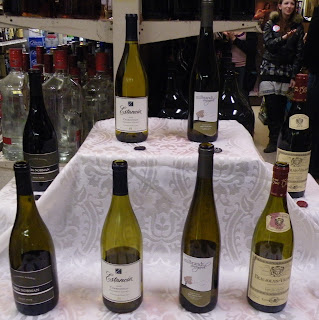 Posted by The Sweet Sommelier at 3:36 PM