Denis Waitley once said, "Chase your passion, not your pension.”  Like good entrepreneurs, that is exactly what Beckie Tilden and Scott Wagner did to fulfill their dream of making wine in Wyoming.  This passion-filled endeavor didn’t just happen overnight.  It was a labor of love that has felt some growing pains as Buffalo Jump Wines leap to success.


Before making wine a full-time business, Scott commuted to his former job…in New York City!  The Powell native worked in finance and boarded the plane to Wall Street every week.  After the economy turned in 2008, Scott did economic development work for Cody.  During this time, Beckie (from a six-generation Meteetsee, Wyoming ranch family) was known as “Beckie Home-Eckie” since she was the middle school home economics and then the Title I reading and math teacher for a total of 16 years in Cody.  Scott had been making wine for decades—literally; his first wine making experience was in his college dorm room in Utah.  In April of 2011, the couple started the federal and state licensing processes to open a commercial winery in Cody.  They sold the first bottle of Buffalo Jump Wine on December 8, 2011.  By mid-2012, the winery was taking off so fast that it could no longer be just a part-time venture.  Scott left his day job and began making wine full time.  Beckie finished the school year in May of 2012 and made the decision to leave teaching.  This was scary for her, but as she said, they, “Have never looked back!” 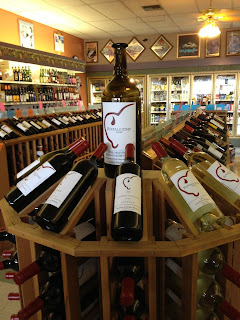 Buffalo Jump Wines on display in a Wyoming liquor store.


Of course, one of the biggest wine-making obstacles in Wyoming is where to get the grapes.  Buffalo Jump sources its fruit from different areas of California, depending on the grapes.  The Cabernet Sauvignon (also made into a rose) comes from the Suisun Valley, the Sauvignon Blanc comes from Lake County, and the Chardonnay from Santa Maria.  All of these grapes are chosen for their specific wine-making qualities, and the vineyards that grow these grapes have long-term contracts with Buffalo Jump.  The grapes are handpicked, crushed, and fermented before the trip to Wyoming because Scott and Beckie do not yet have the facilities to do the crush in-house.  Once in Cody, the art of winemaking continues.  The wines are fined (removing visible particles in the wine) with vegan-friendly measures—though this isn’t necessarily advertised on the label.  Some of the white wines are filtered and some also go through cold stabilization to remove certain acids and particles that might cause sediment.  Few additional sulfites are added during the process.  (An ironic side note to this is that Scott has a sensitivity to sulfites.  His slight allergy makes for wine drinkable by others who may also have this  same issue.)  Wines are aged in French and American oak before they are bottled and labeled on site. 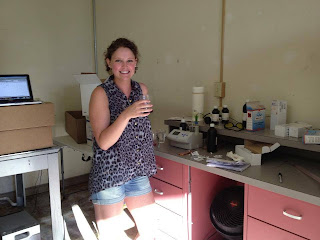 Though the winery is growing by leaps and bounds due to passion and perseverance—Scott and Becky were just moving into a new tasting room with triple the space when I visited—there were hurdles to jump.  Most of these issues occurred because Buffalo Jump was a venture no one in Cody knew the exact steps to follow for legality purposes.  For instance, the city was unsure of what to do to fulfill the federal, state, and city licenses.  The health inspector wasn’t aware of how harmful chlorine could be to wine at any step in the winemaking process so had to rethink the health inspection of the facility.  (The winery uses acid sterilizers, which have no effect on the wine, for disinfection purposes instead of chlorine and bleach.)  Scott and Beckie have even called on their Republican senator, Mike Enzi, to help them clear up a few issues with the TTB (Alcohol and Tobacco Tax and Trade Bureau).  However, all of these “problems” then became positives as Buffalo Jump paved the way for other area businesses that may want to follow in their footsteps.  The other difficulty faced has been marketing the wine.  Let’s face it…Wyoming is a HUGE state.  Scott traveled over 75,000 miles in one year promoting Buffalo Jump Wines to those around the state.  Wyoming has been incredibly receptive though, as people all over have supported Scott, Beckie, and Buffalo Jump Wines. 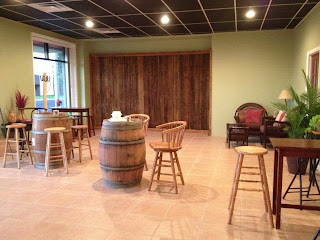 
When I heard Scott and Beckie talk about their wines, I could hear the passion in their voices.  Scott said, “We just love it!”  And this love for the craft of winemaking is evident in each wine they make.  The 2012 Sauvignon Blanc is a unique wine with ample lemon and melon notes, very smooth on the palate.  The stainless steel fermented 2011 Chardonnay is a crisper style of Chardonnay with mineral and a hint of butter.  The 2011 Cabernet Sauvignon rose is a great summer wine.  Beautiful light ruby in color, it is filled with tart strawberries and just a slight suggestion of leather.  (Plus, I love a single-varietal pink wine.) The 2011 Cabernet Sauvignon is filled with baked fruit, vanilla, and cedar.  Aged for 16 months in French and American oak, it has smooth tannins.  I also love that it is only 12.6 percent alcohol, proving that a good Cab doesn’t have to be hot with alcohol.  The Petite Sirah from 2007 is one of Buffalo Jump’s reserve wines.  With notes of forest floor, pine, earth, baked plum, and cedar, this is a special wine.  The last regular tasting wine was the 2007 Merlot, with smells and tastes of berries, petrol, garage, berries, earth, and spice; this was a solid Merlot with a very-pleasant finish. 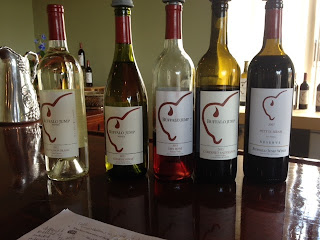 ﻿
The regular tasting lineup.
When we finished tasting in the front tasting room, Beckie and Scott led me back to their new and improved production area for barrel tastings of some unique wines they bought when they were trying to source grapes.  A winery in California was actually going out of business, yet still had wines in barrels; some needed bottled and some still needed aged.  Beckie and Scott helped that winery bottle its final vintage and then purchased the barreled wines to continue aging in Cody.  The wines included a 2006 Petite Sirah, a 2007 Cabernet Sauvignon, a 2005 Cabernet Sauvignon, a 2006 Cabernet Sauvignon, a 2007 Cabernet Franc, and a 2006 Petite Verdot.  Scott and Beckie aren’t sure yet what path they will take with these wines, but whatever they choose to do…I want to be able to purchase these wines!  The extended aging has softened the tannins while bringing out the fruit.  My two favorites were the 2006 Cabernet Sauvignon (already achieving a brick-orange color with baked fruits, pepper, oak, and soft tannins) and the 2006 Petite Verdot (inky, brick-red with Fig Newton, dried fruit, vanilla, and supple tannins).  These are wines I will jump at the chance to have in my glass! 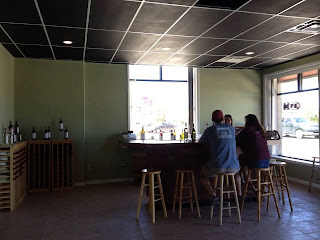 
“Passion is energy. Feel the power that comes from focusing on what excites you,” said Oprah Winfrey.  Beckie and Scott make Buffalo Jump Wines with a true passion, and these wines are exciting for all who taste—and all wine lovers in Wyoming.  The future of Buffalo Jump is also exciting as they plan to make mead (honey wine from Lovell, Wyoming honey) and a moscato; they are also looking at the possibility of opening another tasting room in Wyoming at some point and creating a wine club for customers.  I have jumped on the bandwagon of Buffalo Jump Wines, a bandwagon I will be riding well into the future! 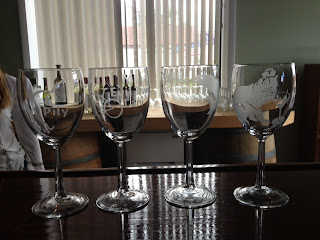 Personalized glasses at the tasting room for Buffalo Jumpers who stop in to enjoy wine.
Posted by The Sweet Sommelier at 12:24 PM