I often talk about the large state of Wyoming like it is a small community all its own…that just happens to be spread out over 97,000 square miles.  (Keep in mind we are like a small city, since there is only about 500,000 people in the entire state!)  I also often talk about how everything is "close" in Wyoming terms because we are so used to driving all over for everything.  I realize most people would think it was crazy to drive eight hours (one way) to visit wineries, but not this Wyoming sommelier!   Last week my hubby and I decided to hop in the car to visit our neighbor state of Colorado for a long weekend in the closest AVA (American Viticultural Area) to Wyoming:  the Grand Valley of western Colorado. 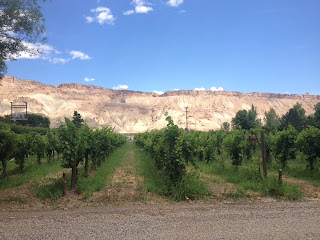 Vines growing in the valley, surrounded by earthen hills.


The Grand Valley AVA was Colorado’s first of two AVAs (West Elks is the other).  Though the Grand Valley became an official AVA in 1991, grapes have been grown in the area since the 1890s, and the towns of Fruita, Grand Junction, and Palisade have been famous for cherries, peaches, and other produce for decades.  The 32,000 acres of growing area are unique in many ways.  First, the region only averages around ten inches of precipitation a year, and though grape vines grow well under adverse conditions, this just would not be enough water for great vineyards.  However, what the Grand Valley has as its secret weapon is the Colorado River!  The river runs through the entire valley, from the Grand Mesa on the east to the Colorado National Monument on the west, providing wonderful irrigation for grape and produce growers.  The Grand Mesa (the largest flat-topped mountain in the world) provides shelter for the eastern most vines.  The high altitude—4,700 feet in elevation and among the highest elevation of vineyards in the world—allows for cool nights to partner with hot days.  The winters here are much milder than in the mountainous parts of the state, and a longer growing season allows for grapes to reach later stages of ripeness while still retaining good acid structure.  These factors make superb growing conditions for a multitude of vitis vinifera grapes—no need for hybrids here—like Merlot, Cabernet Sauvignon, Syrah, Petite Sirah, Zinfandel, Chardonnay, Riesling, Gewurztraminer, etc.  In fact, the Grand Valley loves the Cabernet Franc and Petit Verdot vines; these grapes grow incredibly well here.  Many single varietal wines are made from these two unique grapes usually saved for blending only. 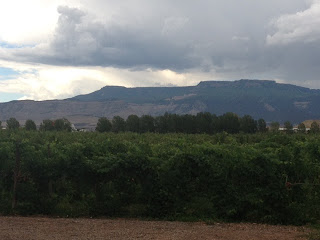 Beautiful vines in the green valley. 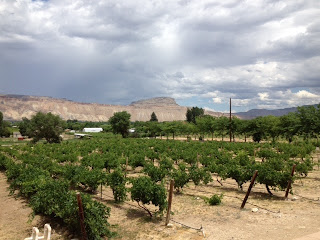 Unique landscape of desert soil and the canyon walls.


The Grand Valley grows a large part of the grapes used to make wines all over the state of Colorado.  It is also home to seventy-five percent of the wineries in the state; there are currently 26 wineries, and I look for that number to keep growing.  On the east end of the valley, near the Grand Mesa, is Canyon Wind Cellars, our first stop.  This well-established and venerable winery has been producing wine since 1996 and has some of the older, modern vines in the area (growing since 1991).  This "grand" first stop set the bar high for the vineyards on the rest of our trip!  In the desert area in the southern part of the valley is Reeder Mesa Vineyards, a smaller, family-owned operation that was recently named the Best Winery at the Mesa County Fair (among other awards, as well).  Here, winemaker Doug tasted with us and took us through his Riesling vines.  In the more central area of the region was another small winery, Hermosa Vineyards.  Again, the winemaker, Kenneth, tasted with us and did a barrel sample for us.  Farthest west was Two Rivers Winery, producing wine since 1999 and one of the larger producers in the Grand Valley, making an average of 15,000 cases a year.  In between these we also stopped at Carlson Vineyards, Colorado Cellars Winery, Maison La Belle Vie, Mesa Park Vineyards, Plum Creek Cellars, and Whitewater Hill Vineyards. 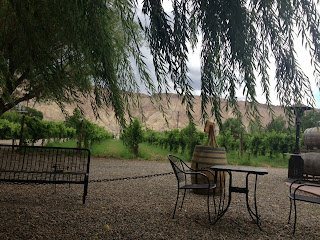 
I plan to write specific blogs on several of the ten wineries where we tasted over the course of the two days (Canyon Wind Cellars, Reeder Mesa, and Hermosa Vineyards), so I don’t want to give away too much here.  However, I will say that the Grand Valley and Colorado wines have an incredibly bright future in this “grand” and booming wine industry!  Most of the tasting rooms we spent time at gave us wonderful and exceptional attention, letting the wines sell themselves, but also helping us get to know the wines along the way.  The friendly faces and customer service made for a very special weekend spent visiting our close neighbor, Colorado.  The Grand Valley was worth the "short trip" where we were treated to great wines and even grander hospitality.  Colorado’s first and largest AVA definitely lived up to its name!  Colorado wines…they are "grand"! 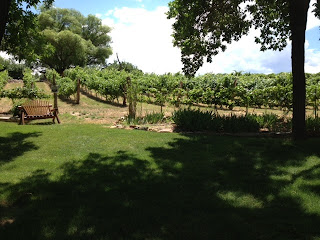 Grand vines in the Grand Valley.﻿
Posted by The Sweet Sommelier at 9:47 PM