Bruce Barton once said, “When you are through changing, you are through.”  Downtown Rapid City is far from through, as it has shown the ability to make great changes over the last decade.  And I mean great as in great for the city itself.  The evolution to a cultural and upscale small city with an impressive downtown has been so much to fun to watch.  This has been led by city-wide efforts such as Main Street Square, but it has also been due to the work of individual proprietors, like Benjamin Klinkel, chef and owner of two important Rapid restaurants:  Tally’s Silver Spoon and Delmonico Grill.


Chef Benjamin started with Tally’s Silver Spoon, remaking it into an upscale, modern “diner” with great food, wine, and events.  (Read about Tally’s here.)  Then Ben purchased Delmonico Grill from another talented Black Hills chef—Pete Franklin (read about Pete’s latest venture here).  Initially, Ben left Delmonico much like it was, both in its interior and its menu.  Though minor changes had been made with the change in ownership, I still considered Delmonico the best steakhouse in Rapid.  I loved its location and wine list.  I ate there for both lunch and supper, depending on the occasion.  It was a favorite of mine and my family’s. 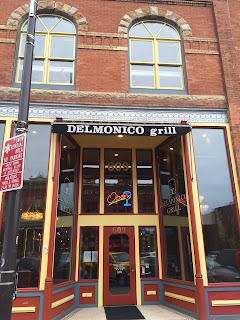 Imagine my delight, then, when I heard Chef Benjamin was temporarily closing down Delmonico to gut the building, rework the kitchen, open up the bar area, and modernize the décor.  Any sadness I may have felt over the short-term closure of the establishment was quickly diminished when I thought of the wonderful, new environment Ben and his mother Barb (self-proclaimed interior decorator of the project) were creating.  I was not a bit disappointed!

To say Delmonico Grill’s new interior was impressive was an understatement.  Sleek, modern, and dramatic decorations were in place of the former art décor-inspired sconces and pictures on the walls.  The lighting was hip industrial.  The new art on the wall was creative and unique—a cow’s head and bone art installation covered one wall with a cow’s hide seating area below.  Super.  Super.  Cool. 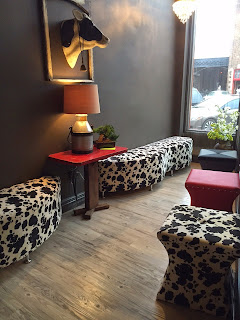 At the end of the long room was a visible and sizable bar.  The center of the space housed one-of-a-kind round tables perfect for larger groups.  Serving stations were hidden in between these distinctive tables, making service to the entire restaurant easy.  The whole environment was edgy yet comfortable, classy yet quaint.  As we sat down, we noticed many customers dressed up; not over dressed, just looking nice for an excellent meal and night on the town.  The instant we stepped inside, I loved the ambiance Ben and Barb had created.


As for the menu, some of my favorites still made their appearances, like the Kona-encrusted ribeye…my mouth is watering just thinking of it.  The amazing French onion soup was the same, as was the excellent wine list.  Added to these entrees were other rotating options.  I had the squid ink risotto; however, it was a hard choice from the many other tasty delights available, including seafood and lamb.  When time for dessert came, we purposely didn’t finish the large ribeye so we could have the house classic--crème brulee, and we were again not a bit disappointed.

One aspect of Delmonico that did not change was the excellent service.  Ben’s mom Barb met us at the door.  No one realized I was there to blog about the experience—I hadn’t contacted anyone before hand—so I can truly say we received wonderful, friendly treatment just because that is what Delmonico’s staff is all about.  Barb had a friendly conversation with us when I inquired about the decorating inspiration.  (Ben worked with an architect on the floor plan he had in mind, and Barb got to have her way with the rest of the interior—though Ben may have a different story!)  Our server was amicable and capable.  Our salads and wine came according to perfect timing.  The entrees were flawless, and the dessert ended an excellent experience. 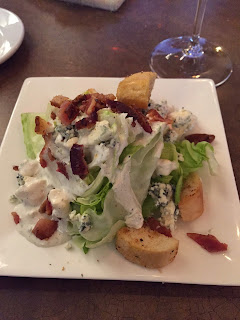 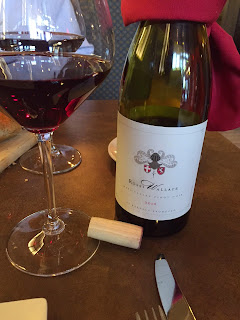 Downtown Rapid City has changed—definitely for the better—over the last decade.  The city itself has been the instigator of some of that change; however, individual business owners like Chef Benjamin Klinkel have also led the charge to evolve Rapid into a small city worth visiting.  It is filled with cultural activities, great food, and cool establishments.  The updated Delmonico Grill is yet another example of the new environment of Rapid; the upscale and modern setting prove that Rapid is not through changing yet!  I look forward to witnessing the continued evolution.
Posted by The Sweet Sommelier at 2:37 PM