The Wheels in the Sky--Red Cap Vineyards

The day Tom and Desiree Altemus purchased their Howell Mountain property, Tom opened the door of his family’s new home on ten acres and looked up to the clear, dark Napa Valley sky overlooking his future vineyard site.  Just as he glanced up, a huge meteor streaked across the sky.  The fireball seemed so huge that Tom was sure he was going to see it burst into flames as it hit the ground a hillside over from his new acreage.  Though the meteor wasn’t as big as it appeared, Tom sensed it was a sign, a symbol.  First, he knew he and his growing family were supposed to be in this place, this setting.  He also knew that the success of his planned vineyard and wine were going to come only after his own walk through the fire of multiple obstacles.


The first obstacle Tom faced was Napa itself.  In the middle of a moratorium of allowing new vineyards to be planted, Tom waited for the okay to plant his vines.  He waited, and he waited.  He waited so long that he had to take action.  He brought a lawsuit against the county of Napa to move the development of his vineyard forward.  Many others who were also waiting for the approval from the county for their own vineyards watched Tom’s lawsuit with great interest.  If he could get the powers that be to begin approving the planting of new vineyards on Howell Mountain, not only could Tom and Desiree advance, but many others could too.
The lawsuit worked.  The backlog of permits to plant on Howell Mountain started to move.  Tom and Desiree began planting after three years of waiting, and so did others.  This was the second boom on Howell Mountain, following early pioneers like Randy Dunn in the 1970s.  Tom became one of multiple new faces growing mountain fruit from the unique Napa AVA.


Tom’s plans progressed, and his vines and grapes grew beautifully on the six and a half planted acres.  The first test vintage from which Tom and his winemaker, Rudy Zuidema, made wine was 2005.  Tom and Rudy were impressed with the juice from the “practice” vintage and looked forward to 2006, the first full vintage.  (See my story of the 2006 Red Cap Cabernet.)  This was a great first vintage.  The 2007 was an excellent vintage year in general, also producing what Tom deemed would be an excellent wine.   He and Rudy released the inaugural 2006 wines in 2008 as planned…and then the next obstacle hit:  the worst of the deep recession. 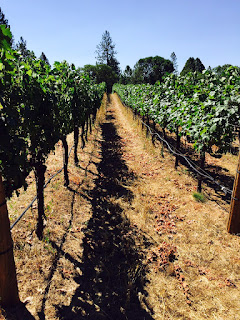 Selling a high-end Howell Mountain cabernet in a time when everyone was cutting back spending was not an easy path.  Especially with a wine from a little-known grape grower and a young wine maker.  But Tom, Desiree, and Rudy trudged forward, making stellar wine and promoting their AVA.


The wines began to sell, slowly at first, but steadily none the less.  More solid vintages came in from Tom’s beautiful red dirt.  His children grew.  His wife continued to work her day job.  Red Cap Vineyards’ popularity and prestige increased, as did the reputation of the Howell Mountain area itself.


Tom believes Howell Mountain fruit is the key to the success of his wines; it is what allowed him to weather the stress and strain of releasing a first vintage in some of the worst economic times the country had seen in decades.  It is also what allowed him to build a reputation of excellent wines.


The soil, almost as fire red as that move-in-day meteor, gives a great mineral characteristic to the wines.  The red dirt filled with oxidized iron and mineral characteristics is called Aiken loam and is like no other.  In addition to the soil, the climate also adds to the character of the wines.  The mountain area of Tom’s planted acres has a much smaller range of daily temperatures throughout the year:  the temps do not get as cold at night, nor do they get as hot during the day.  This leads to a long, steady growing season.  The fruit ripens more slowly, allowing the seeds and their tannins to ripen more fully.  Tom actually doesn’t pick based on brix (the level of sugar in the grapes) like many growers and wine makers do; he harvests based on seed ripeness.  The seed tannins ripen much slower than the skin tannins; they are also the tannins that, when not developed, give the “green” flavor to wines.  Tom picks when the seed tannins are nutty and soft, and these softer tannins show themselves in his wines--wines with big, bold fruit; deep, dark color; peppy, perfect acid; and silky, soft tannins.  Really, a perfect combination for cabernet sauvignon wines. 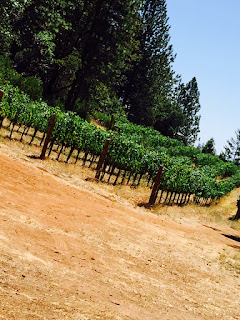 Tasting at Red Cap is as unique as the wines and soil.  There is no tasting room, and there are no tasting room hours.  Tom invites fans up periodically for a relaxed tasting similar to ones he had experienced at other wineries.  A welcoming picnic table sits with views of the vineyards and forest.  Roscoe, the Altemus family dog, greets wine lovers who sit and visit with Tom (and Desiree if she is home) while sampling Red Cap vino.

While sitting and sipping with visitors, Tom talks about the vineyards, the vintages, and the mountain.  On this particular day, Tom and I started with the Red Cap 2013 Sauvignon Blanc.  Beautifully aromatic and refreshing, this was a great wine to prime my palate.  This was also the perfect light wine for such a hot day.

Next we had the Red Cap 2011 Cabernet Sauvignon, a year that, at the time, was known for less-than-stellar growing conditions.  However, after careful wine making techniques and a few years in bottle, it has matured into a great example of mineral and metallic rust (think the red Aiken loam) on the nose with full fruit and tannin on the palate.


We finished with the Red Cap 2012 Cabernet Sauvignon, the harvest known as nearly perfect.  This wine is still quite young in the bottle, yet shows bold cherry with silky tannins on the palate.  It is already a show stopper and should age well for years to come. 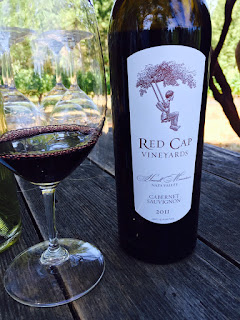 
He also talks with pride of his property and where all the effort has taken it and his family.  His children—now 20, 17, and 11—all have small jobs and vineyard chores for which they are responsible.  However, his oldest only spends summers at home now since she is in college.  His middle son is excitedly looking forward to his busy senior year.  It’s the Altemuses’ youngest child that seems to relish in the vineyard work.  He will run and play in the vineyard or come home from school and eat handful after handful of grapes, all while feeding many to Roscoe as well.  Boy and dog are definitely grooming themselves for future vineyard work by first-hand knowledge of the vines. 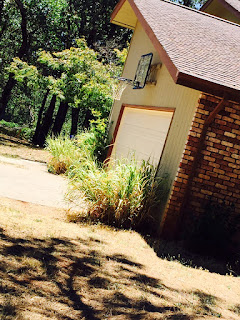 Red Cap Vineyards is a perfect example of great wines that come from having vision and perseverance, of letting no obstacles stand in the way.  After the fateful symbol of the meteor streaking across the sky, Tom and Desiree have been able to build a comfortable, rural lifestyle through their hard work, a lifestyle they love sharing with their children, family, and friends.  Tom put it best when he honestly stated, “This place is badass.”  Frankly, after one morning with him at Red Cap, I would agree.
Posted by The Sweet Sommelier at 3:20 PM