I admit freely, have admitted it freely for years, I am a wino.  (I often like to spell it wineaux…it makes me feel better.)  I enjoy a glass of wine multiple nights a week with dinner.  I love new and different wines when I find them.  I love experiencing the culture of wine, learning about wine, and teaching about wine.  But lately…lately…I have been neglecting my lover wine and spending a bit more time with beer…and as a friend pointed out, it is as if I am cheating on wine!  The first weekend in May I led a Brinery Tour through the Black Hills, enjoying both wine and beer (see blog post below).  This past weekend, a group of friends and I went to Fort Collins, known as the Napa of Beer, to attend a private beer tasting there with Lauren Hoff, founder of the blog with the same name—Napa of Beer.  Lauren, knowing I was a wineaux, focused the very unique tasting on “Beer for Wine Lovers.”  Then we tried some truly one-of-a-kind beers.


Beer One:  Funwerks Saison—This beer was produced right in Fort Collins, though I have not visited Funwerks yet.  Saison beers were originally brewed for farm hands to drink in the French speaking areas of Belgium.  Special yeasts were used that made this beer sweet and smooth with “funky” flavors.  It had a light straw color, and at 30 IBUs (International Bitterness Units) was considered not overly bitter.  This was my friend, and fellow beer taster, Jody’s favorite beer of the six. 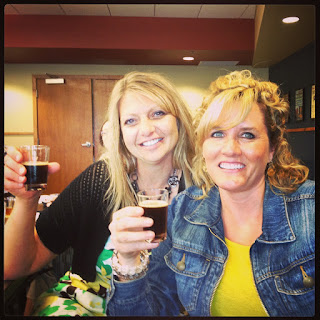 Though not sipping the Saison, Jody and Michelle enjoying the tasting.
﻿
Beer Two:  NoLi Born and Raised IPA—India Pale Ales like this beer are known for their bitterness from the hops used during production, and the NoLi was no exception.  Its score of 80 on the IBU scale shows the “hoppiness” in the drink.  However, people--like my hubby--who love IPAs, love the hoppy bitterness.  This second beer was his favorite in the tasting.  The brew master who makes NoLi beers got his start in Fort Collins, then took his talents to Washington to start his own brewery.  It was made in Spokane, and all the materials used came from within 200 miles of the brewery. 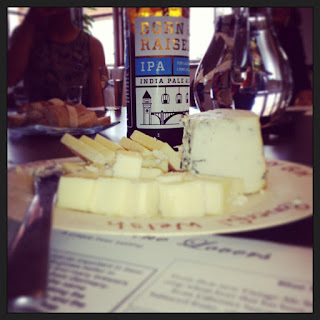 NoLi Born and Raised IPA.
﻿
Beer Three:  Midas Touch Clone—When King Midas’s tomb was discovered, beer was found buried with him.  Scientists and beer enthusiasts have broken down the ingredients in the beers found, and this mix of beer, mead, and grapes was a clone of the ancient beer.  (Many ancient beers have been scientifically mapped and then recreated in modern breweries.  Who knew?!)  The hobbiest brewmaster who brewed this beer, Matthew Burton, was on hand for our tasting.  He brews in his garage in his spare time; this particular beer he aged for four years, mostly in bottle.  I enjoyed the mix of the wine and beer world in this taster; the mead (honey wine) was evident on the palette.  This brew was my favorite.  I drank another glass later in the tasting and found I liked it even more when it had warmed up a few degrees.  (This is usually the exact opposite of how I feel about beer:  I want it colder than cold can get.) 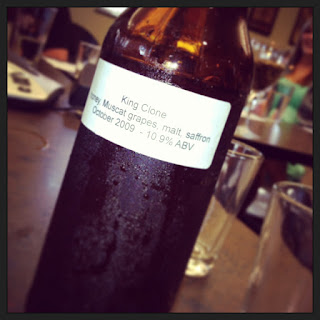 
Beer Four:  Blue Moon Impulse—The only beer we had that was not technically from a craft brewery (must be small and independently owned), Coors produced the Blue Moon Impulse.  It was a combination of wheat beer and Cabernet Sauvignon grapes as part of the Vintage Ale series combining beer and wine.  This beer was lighter, sweeter, and softer than any of the others.  To me it was reminiscent of church wine with some carbonation.  However, many liked the softer style that wasn’t beer-like or wine-like.  My sister enjoyed this one; it was her favorite.


Beer Five:  Odell Amuste—Odell Brewery’s community room played host (with Lauren and Matthew) to our private tasting, and this fifth beer represented the host brewery well.  Amuste was an imperial porter aged for two years in oak barrels with Tempranillo grape juice sourced from the western slope of Colorado.  Beautifully brown in color, the porter showed hints of coffee and chocolate.  It was a very robust beer, and my Fort Collins friend Rhonda especially enjoyed this one. 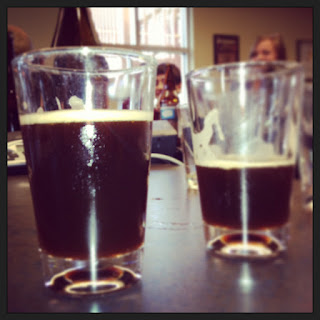 
Beer  Six:  Solera Old Ale—A second project from one of our tasting hosts Matthew, Solera started as a group barrel with multiple brew masters adding ingredients to create a sour ale.  From 2008 to 2011, ten gallons were removed from the barrel for consumption each year, and ten more gallons of new brew were added.  Our batch was pulled in 2011, and not long after, the entire barrel was emptied for use.  What that meant was we were truly drinking an exclusive beer.  Many thought this was too bitter for them, but it was actually my second favorite beer of the tasting.  This wine lover found I actually liked the beers MOST that tasted the LEAST like beer.  Go figure. 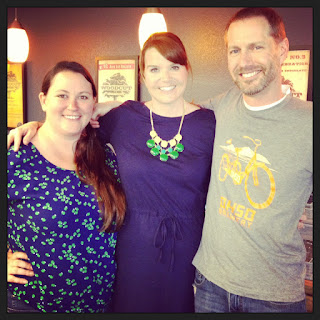 With Lauren and Matthew--thank you both!
Though I don’t usually drink beer, I love the whole culture behind the microbrew and craft beer industry.  People are fun, friendly, and accessible, while the brewery tasting rooms are noisy, boisterous, and vibrant…all qualities I enjoy.  Lauren taught us how to taste beer, and though there are similarities to wine tasting, there were unique aspects just for beer.  Sometimes I think the wine world can be too stuffy and pretentious; the craft beer world takes this stuffiness and laughs in its face!  I don’t see myself ending my love affair with wine anytime soon; however, I truly enjoyed our beer tasting and learning even more about beer.  I may “cheat” on wine periodically to get my fill of the alternative, and entertaining, culture of beer! 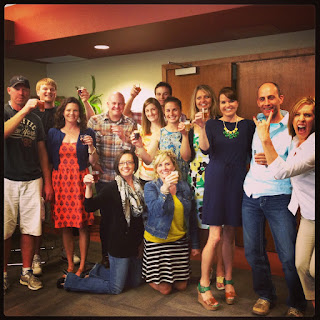 Our group enjoying our private tasting.
Please visit Lauren Hoff's Napa of Beer.﻿
Posted by The Sweet Sommelier at 12:47 PM