Size Matters: All in the Family--J Cage Cellars

The next installment in my small series on microwineries, continuing to tell the stories behind great, small producers.  Learn more about Roger and Donna Beery and their newest wine adventure, J Cage Cellars.

Size Matters:  All in the Family--J Cage Cellars

Don’t let the last name fool you.
Though “beer” is at the heart of their surname, wine has always been at the heart of Donna and Roger Beery’s family.
It all started on their first date.
Roger confesses he may have had a little too much wine that night.
Though just in his twenties then, Roger can think back even further to when he started to appreciate wine.  It was international cooking sensation Graham Kerr, who paired food with wine on his tv show, that turned Roger’s teenage interests to wine.
Both Roger and Donna saw their “wine-stained dream” begin in Napa, California on their first trip there in 1984.
Roger’s aha! moment for wine happened when the Beerys pulled into Caymus Vineyards.  Winemaker Charlie Wagner met them in the tasting room.  Though the day was cold and rainy, Charlie gave a tour of the vines.  Roger began to understand how wine was actually made in the vineyard; he also saw that wine making was both a science and an art.
He was hooked.

Donna’s aha! moment happened later that same trip.  At the time, she didn’t like red wines, so she drank whites only.  At the end of the tasting day, the travelers and their companions made it a habit to open a special bottle.  One evening, the wine was a Jordan Cabernet.  The Beery’s companions basically forced Donna to drink the first sip…then she needed no encouragement.  She fell in love with the beautiful red wine.  She “lost her cabernet virginity” and went back to the winery the next day to buy two cases!

These two cases were the start of the 1000-bottle cellar Roger and Donna eventually collected.

It was this collection that initiated the Beery children into the world of wine.
Roger and Donna raised their children first in Austin, Texas and then in Breckenridge and Denver, Colorado, where Roger owned a risk management company for the auto industry.  All the family members kept close ties to Austin and their Texas roots.
In fact, when Roger and his son Conch were reading “the bible”—AKA Texas Monthly Magazine to a red-blooded Texan—Conch saw an ad for the brand new viticulture and enology program at Texas Tech.  He instantly knew that was what he really wanted to do, even though he was already working on a business degree from another college.
Conch started at Texas Tech and fell into the life of wine he saw modeled at his parents’ elbows. Conch’s first winery gig was as a volunteer intern at Solaro Estate.  This turned into a paid internship and then an assistant wine making job there in the Texas Hill Country outside of Austin.
Roger encouraged any and all wine-related education for his children.  So much so that when Conch turned 21, Roger took his son to Napa, mimicking the trip Roger experienced in his twenties.  Later, Conch was able to follow the harvest season around the world.  Since the southern hemisphere harvests six months ahead of the north, Conch was able to work not only in Texas, Sonoma, and Napa, but also in Australia and New Zealand.  He currently works for Gundlach Bundschu in Sonoma.

Lest anyone believe daughter Whitney was not following the family passion, don’t be worried.  She also went to Texas Tech—like a good Texan—and got a degree in marketing and hospitality.  The wine-travel bug bit Whitney as well, and she soon started searching for jobs in Sonoma.  Today, she works for Jordan Winery.  Yes, the family wine story came full circle when Whitney took a job for the producer who made her mother’s aha! wine.
During this time of wine exploration for the Beery children, Roger and Donna were also charting new wine territories.  Still foodies, Roger and Donna watched the movie Julie and Julia.  The whole idea of blogging about their passion intrigued them.  At this same time, Conch was working on a project for his enology program—researching stories about the emotional impacts of wine.  Roger volunteered himself and Donna to write their wine stories.  These became the first posts on their new blog "Bacchus and Beery."

At first, Roger and Donna thought they were just going to be writing about why they loved wine and why others should too.  However, they quickly saw their fascination with, and appreciation for, small producers come to the forefront.  They championed the “little guys” of wine, those artisan producers who were often “overshadowed by their large, corporate brethren.”
"Bacchus and Beery" continued to expand.  Roger and Donna wrote about wine events, wine travel, and wine samples.  They met and interviewed winemakers.  Soon, “Bacchus and Beery Wine Radio” on Voice America Radio gave them yet another outlet to help artisan producers showcase their wines.
Roger and Donna loved all aspects of being bloggers.  They especially enjoyed the stories of those that had left established careers to follow their dreams of making wine, often doing low-paid internships just to learn the craft.  Only a lover of the written word like Roger—who minored in poetry—could see the foreshadowing in this.
Sitting on a porch in Santa Rosa, Sonoma County, California, Roger and Donna were celebrating their wedding anniversary.  Roger had a very special gift for his wife of thirty-five years—a ton of pinot noir grapes from the Nunes Vineyard, one of their favorites.  This is exactly what Donna wanted and exactly what both Beerys had been working toward.

They now split their time between their home in Austin and the mother-in-law’s cottage in Whitney’s backyard, where wine making has them scrambling during the months they spend living in Sonoma County.
The first vintage (2014) was the Nunes pinot, sourced because of great connections the Beerys made through their blog; a viognier that Donna calls “Momma’s wine,” sourced from an unusual clone; and a sauvignon blanc, sourced from the historic Schmidt Family vineyard.
Roger and Donna believe in minimal manipulation of their wines.  This is the reason they worked so hard to find high-quality fruit from high-quality growers.  They also believe that single-vineyard fruit shows true terroir, and they will continue to make this style of wine.
This endeavor is accurately a family affair, as finally all four of the Beery family members and their wine obsessions have come together for this project.  Roger and Donna are at the helm of J Cage wines.  They harvest the grapes from those select vineyards themselves.  They also do the sorting table, punch down, and initial fermentation labor at a custom crush facility in Healdsburg.
When they do go back to Austin, son Conch acts as a consultant to keep tabs on the wine as it ages and waits for the next step in its wine life.  Daughter Whitney uses her marketing expertise to promote and sell J Cage wines.  Even Conch’s and Whitney’s significant others help.
The name also has a personal connection.  Though the Beerys did experiment with other titles, they wanted something that was meaningful.  Beery sounds more like a malt beverage than a wine, so they went in a different family direction.  J Frank Cage was Roger’s great-grandfather.  The Cage family was very influential in Austin, and J Frank helped design and build the iconic Lamar Street bridge over Lady Bird Lake in downtown.  He was a great craftsman, and Roger wanted to honor the wine craft by naming it after J Cage.
The three current releases are truly excellent wines.

The Pinot Noir is filled with cherry, strawberry, and earth, both on the nose and the palate.  The strong acid is clearly showing, so this wine will age beautifully.

The Viognier is filled with overripe melon, tropical fruit, and mineral on the nose.  These same elements, in addition to a slight creaminess and a touch of apricot, show on the palate.

The Sauvignon Blanc is a beautifully aromatic blend of pineapple, mineral, and grass.  A richness shows through to the finish, without being overdone. 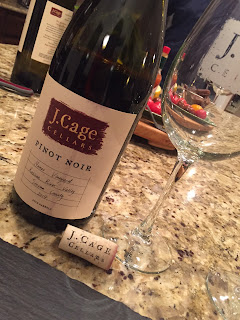 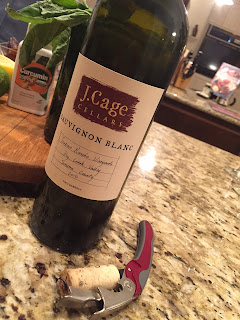 In 2015, these same three varieties will be the backbone of the production, with chardonnay and another single-vineyard pinot being added.  The 2016 plan is still wide open.  Grapes will continue to be sourced from single vineyards; Roger and Donna hope to grow in production quantity while keeping the quality of wines top priority.

With a last name like Beery, one might believe this would be a beer-loving family—not that the Beerys have anything against beer!  However, from father and mother to son and daughter, passion for wine is in the blood of this clan.
Roger and Donna should have known after their first date that wine was going to be a large part of their futures.  The connections made due to their passion for wine and the “Bacchus and Beery” blog continued to foreshadow the paths that would take four different routes but all end in the same place—Sonoma County, California.
Posted by The Sweet Sommelier at 7:25 PM