Bring on the whiskey!  Shocking, to hear me say that, I know, but for a short period of time this past weekend, I became a bourbon whiskey connoisseur.  True, it was for a VERY short time, but while I was touring Wyoming Whiskey in Kirby, Wyoming (population 92, thank you very much) I was loving whiskey! 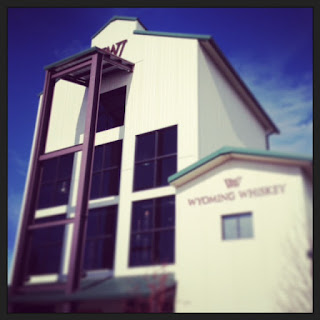 Wyoming Whiskey’s beautiful, multi-million dollar facility towers high above all other rooftops as one drives into Kirby.  The outer façade of the building is only the beginning of the impressiveness of this business.  Founders of Wyoming Whiskey wanted a product that would wow, so David DeFazio and Bradford Mead (brother to current Wyoming governor Matt Mead) looked for a distiller who knew what he was doing.  They lured Kentucky master distiller Steve Nally out of retirement (after distilling and retiring from Maker’s Mark) and to little old Kirby to begin producing bourbon in the Equality State.  Next, every master distiller needs a still, and Wyoming Whiskey doesn’t have just ANY still.  This still is a 38-foot-tall, vertical still made of copper by Vendome that was the first of its kind in the country. 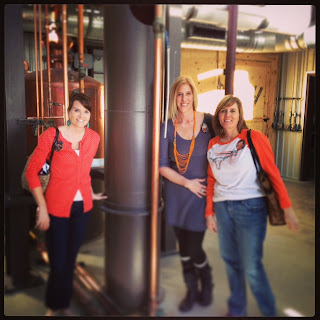 That is a still we are standing with:  the Vendome vertical still.

To produce the whiskey in this state-of-the-art equipment, all the raw materials come from within one hundred miles of Kirby.  The corn, wheat, barley, and water don’t have far to travel.  The yeast is specifically chosen, and the barley travels the farthest to be mashed—to our neighbor state, Montana.  All of these ingredients ferment to produce a raw “beer” type of liquid.  (Not actual beer, but closer to beer at this point than whiskey.)  Getting to see this fermentation process up close was very interesting.  I paid special attention to similarities with wine but also enjoyed learning the differences.  It was a special treat when one of the vats of fermenting mash started to boil up from all of the heat and carbon dioxide being released.  It was like a living organism as it foamed and mulled around (which, I guess, it kind of is).  One could feel the heat, and when a nose was put close enough to the surface, the fumes of the CO2 gasses singed the nose hairs and burned the eyes! 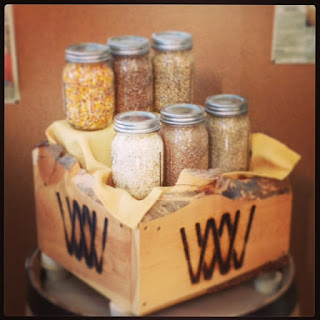 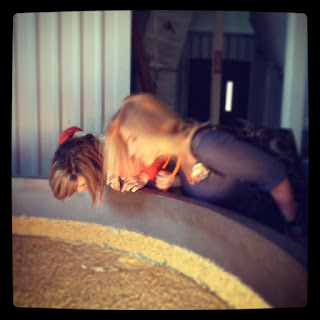 The CO2 gasses burning their noses!
﻿ 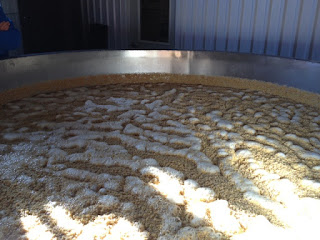 This fermented liquid is put through the still, and then is turned into “white lightening,” or moonshine whiskey.  To become bourbon, this whiskey must be aged in new, American oak barrels for a minimum of two years.  Once the whiskey is in the toasted oak barrel, the barrel is branded and numbered, then taken to the “rick” house for aging.  Within the rick house, barrels must be turned and rotated over the course of the aging years to ensure balanced contact and aging in the oak.  Once ready, the bourbon is bottled on site, and then sent to the Wyoming State Liquor Division for distribution and sale.  The very first release of Wyoming Whiskey sold out from the state warehouse in about three minutes!  The second release is expected to go as fast, with pre-orders and the limited quantity available. 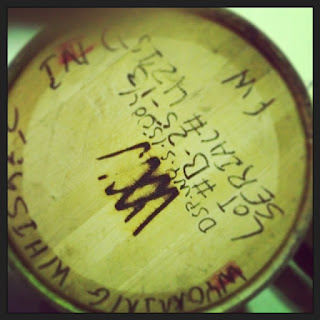 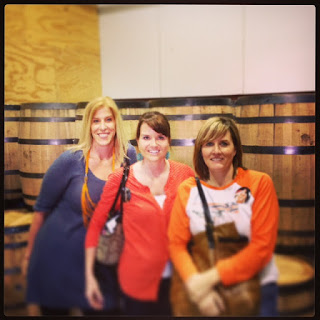 In the barreling room.

Once done with the very informative tour, our group went back to the gift shop for a sample.  This is how quickly my life as a bourbon connoisseur lasted:  until the liquor hit the back of my throat and burned all the way down!  In Wyoming Whiskey’s defense, I am not a hard liquor drinker; I am a wine drinker.  The 12-15% alcohol I am used to experiencing in the average wine I drink could not prepare me for the 44 proof bourbon!  On the tip of my tongue, the whiskey had a very pleasing taste though.  I also thought the amber color of the liquid was beautiful.  However, I am not a whiskey drinking lady, so I will stick with my wine.  That said, those drinkers that enjoy bourbons and whiskeys, please try Wyoming Whiskey…if you can find a bottle for sale!  It is a hot commodity, and I look forward to seeing how many drinkers out there will say, “Bring on the Wyoming Whiskey!”
Posted by The Sweet Sommelier at 9:05 AM