Tony DeMaro and company were on a mission:  a mission to create a total adult play land in Rapid City…a mission to put the final touches on projects started years ago...a mission to give the Black Hills the best entertainment.

First there was Murphy’s Pub and Grill, the cool, modern sports bar with forty beers on tap and contemporary pub-style food.

Next there was The Blind Lion, the ultra-hip speakeasy hidden below Murphy’s with frequent live music and delicious menu options to pair with the best, hand-crafted cocktails.

Then there was Kol, the trendy eatery featuring the beautiful coal-fired oven that cooks up the tastiest tidbits to eat while sipping on beautiful concoctions from the bar.

After this, there was Ignite, the Vegas-style night club that takes over after Kol closes, with pumping DJ beats and a VIP section for bottle service, all while watching acrobats swing from the ceiling.

Yet something was missing.
Where was the casual spot to meet friends for a cheap beer?  The dive bar where everyone wants to hang out?  The one-of-a-kind place to impress friends with…great gaming skills?!

Finally, all Tony’s bases are covered to provide any type of entertainment on Main Street, Rapid City.  Though it is the latest step in what many consider adult Disneyland, Press Start is definitely more of a beginning than an end.

Press Start rocks a whole different vibe than Tony’s other establishments.  Saying it is a dive bar is actually quite a stretch.  True, what many consider “cheap” beers are on tap:  Schlitz, Hamm’s, Pabst Blue Ribbon, Bud Light, and Old Milwaukee.  These beers are served in nothing other than red Solo cups.  However, the full bar also features a Boulevard beer, an O’Dell IPA, an oatmeal stout, and other quality selections. 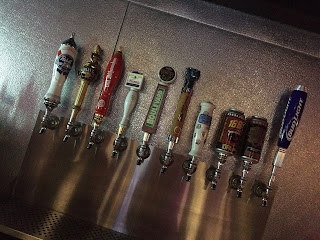 One reason to come to Press Start might be for the old-school beer selection, but the real motive is probably for a totally different reason—the arcade.  Yes, most customers come to get started on the plethora of vintage video games housed underneath Kol.  Over 50 arcade games from the 1980s and 1990s dot the colorful, Tetris-style floor.  Tony partnered with Marc Lynn, owner of nearly 200 retro games.  Marc wanted others to enjoy his games as much as he did, and partnering with Tony for Press Start was the venue to allow this to happen. 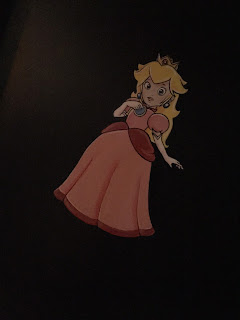 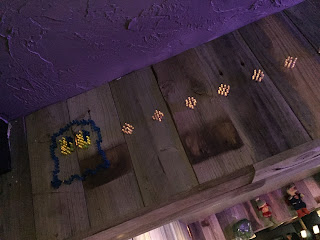 The games one might expect are there—Pac Man, Ms. Pac Man, and Donkey Kong Jr.—but there are other unexpected options, too.  Tron and Dragon’s Lair are very rare selections; so rare, in fact, there are only 14 known Dragon’s Lair machines left in the world, making the one in Press Start very special.  There are also pinball machines, arcade shooters, and skee ball games…and the list goes on. 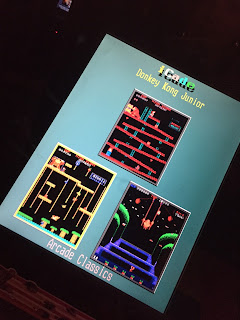 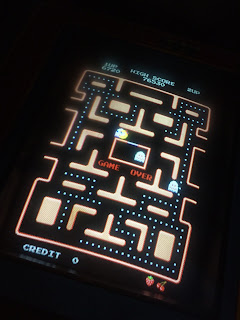 Of course, patrons can play these games for personal satisfaction, but that is only half the fun.  Once a new high score is achieved on any game, the player gets a free drink.  If 50 tickets are earned on the shooting or skee ball games, a free drink is again awarded.  Most of these games still only cost a quarter, showing modern inflation who’s boss.  A few of the ticket games do cost two or three quarters, but even that is a steal of a deal in 2016!

Though I am by no means a gamer, one of my friends was back in his element.  He went straight to Q-bert to get in the video game groove.  Next, he moved on to Dig Dug as his senses became more accustomed to the dark room and bright lights.  Finally, he challenged himself with Frogger and had nearly reverted back to his college days of almost thirty years ago.  Then, as his video-game addiction nearly set in again, he remembered “having no girlfriends in college” (his quote, not mine) and stepped away from the machines just in time to go home to his beautiful wife.
As for me, I went straight to Ms. Pac Man (females unite) to try my hand at this game for the first time ever.  (I know I mentioned I wasn’t a gamer, but did I mention my total lack of hand-eye coordination?) When I actually reached the second screen without losing all three of my lives, I felt as if I had conquered the world!  My coordination (or lack of) got the better of me on Dig Dug and Frogger, so I decided to make friends with some actual gamers.
Press Start has quite a following of regulars.  The two gentlemen I watched have had high scores (and won drinks) on multiple games.  Frogger and Pac Man are two of their favorites.  They see Press Start as a cool place to go with reasonably-priced drinks and entertainment.  They both love the ambiance that takes them back to a simpler time in their lives.  It’s fun and comfortable, lively but not obnoxious.  It is a way to play while still being social, qualities lost on today’s gamers glued to their iPhone or X-Boxes all alone at home.
Press Start is surely not the end of the ever-evolving entertainment provided by Tony DeMaro and his team.  They continue to prove they are no “one-trick pony” with each new business they open.  Murphy’s filled one niche, while The Blind Lion filled another.  Kol and Ignite definitely attracted additional patrons, but there was still a gap.

This gap has been filled.  Press Start has launched yet another revolution in downtown Rapid City entertainment…and it only takes a quarter to begin.
Posted by The Sweet Sommelier at 6:04 PM